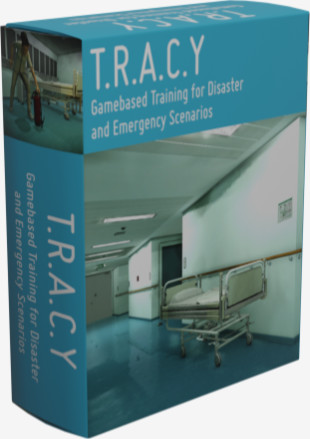 T.R.A.C.Y’s objective is to serve as a training simulation for medical personnel in case of emergency situations. One of the main challenges every hospitals face is the difficulty to perform onsite trainings since this could impose unnecessary stress on the patients.

I was fortunate to join the team right from the start. I was responsible for managing the Perforce (Source Control System), as well as programming. While I was working on the project, I participated on three major versions.

The first version was to determine the easiest control system for the users. All three prototypes had different variations of a third-person camera and were intentionally simplified to reduce visual distraction:

Most participants had some experiences with computers and were most familiar with the mouse as an input device. The test results showed that it created the least amount of distraction to the content. Interestingly, it was then shortly followed by the controller. Although most users were completely new to the device, they managed to adapt very quickly to it and achieved high precision.

The pictures below are mostly from the second version. In this version, we created a fire scenario in a third-person perspective. The user had to assess the situation, check the alarms, check the door for heat and whether it is safe to open or not, then decide if there is enough time to extinguish the fire or should they evacuate immediately.

I only participated up until the third version’s initial phase (last picture), where it became more strategy based. The camera was able to view most of the building, and the focus was now more on coordinating multiple nurses and doctors to evacuate the building.

As I departed to Thailand, T.R.A.C.Y was still in development and is now continuing as a VR application.

Links to the project can be found here:

The Images are made available by